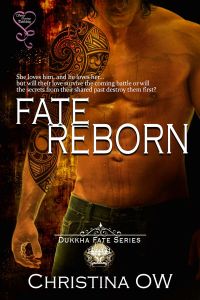 When a man with an ancient grudge meets and falls in love with the innocent girl who’s life was ruined by his vendetta, complicated isn’t word enough to describe the situation he finds himself in. His chance with her would be shot to hell if she were to find out his role in her family’s death. She would probably take the news that he was 325 year old werewolf much better.

The second installment of the Dukkha Fate Series will be available on 26th May! =D And not only that, there will be a $20 Amazon Gift Card Giveaway through Rafflecopter. Better you’re chance by giving multiple entries through my Facebook page. Other prizes include 3 copies of The Hunted by Kenyan Knight and 2 copies of Fate Reborn.

Don’t miss out on this great new release from Sweet Cravings Publishing.

Get the Preview of the series free here for your Kindle, Nook and PC here catch up.

Life had been great these past few weeks. I have a hot boyfriend, got back my dad and my adopted sisters were happy with their significant others. Life was good. That is until I started getting attacked by bouts of pain that would render me unconscious. Something was wrong with me, Ash knew but he wasn’t sharing. Worse than that, Steve in the worst form possible is back to haunt me. And Ash with his hug archaic pride just won’t let it go. Oh, but I haven’t gotten to the worst part yet…hell!

What’s a girl to do to get some long term happiness?

“You two have gotten serious over a short amount of time. Are you sure you’re ready for all of it?”

“Everything is so wonderful because I love Ash and he loves me. What I’m not ready for is the change that is going on inside me. It scares me. If I had a choice, I’d remain human and normal, but I don’t.” This was the first time I was admitting this out loud.

I didn’t hate the fact I would be like Ash, that I loved, what I hated was all the dangers and the constant fear that came with it. Fear of hurting my sisters, fear of loosing someone I love. The constant danger we were in because of Baku and Sabrina. Legends and myths had become reality, threatening every semblance of normality for me especially after all I had been through. Life was never going to be easy on me.

“I hope so,” I cringed as a familiar pain ripped through me. I panicked knowing exactly what was coming next. “Maria, please pull over,” I unbuckled my seat belt and reclined my seat. This time I would unwillingly be ready for it.

“The pain is about to hit,” fear coated my voice heavily. I pressed my lips together and put my hand over my belly. I didn’t have to wait long before a stronger pain ripped through me. I cringed bending backwards pressing my feet against the dashboard. Ann was right the pain was going to be worse than last time..

Maria pulled over to the side of the road and spoke frantically on the phone. I could tell she was talking to Ann. Before I could hear a word of the conversation, longer heavier pains ripped from all sides of my belly. There was no holding the scream that rushed out my throat. I turned to my side, and grabbed at the door, trying to get some air into my lungs.